I learned of the Apple IIGS HyperCard Eamon by reading old copies of GEnie Lamp; there was a discussion between a staff writer, Darrel Raines, and the EAG's Tom Zuchowski concerning the former's attempt to bring Eamon to the IIGS. Over this discussion, the HyperCard Eamon was held up as the paradigm of how not to port Eamon.

I'd presumed that Darrel Raines grew frustrated and had ultimately abandoned his attempt... and this indeed appears to be the case. But he also left behind an artifact, his "tech demo" of what his envisioned port would look like.

Inasmuch as the user's only option is to continually hit the spacebar (it is a mere demo, after all), I thought that rather than making the reader track down the file, extract the folder from the .BXY file, convert the folder to a .PO file, mount the .PO file in the IIGS emulator... (you get the picture), I'd post the entire tour here. (The reader can hit the spacebar at appointed times for effect as he or she scrolls down, of course.) 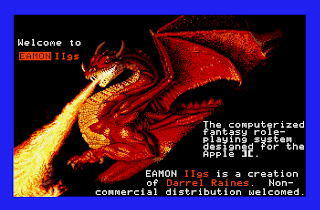 For one, Eamon IIGS has the coolest dragon ever to grace an Eamon splash screen (though that of the the Atari 800 port certainly gives it a run for its money). It's worth the price of admission for that alone. (Oh, and click on the Atari 800 link. Really. And bring your snorkel because you'll be swimming in awesome.) 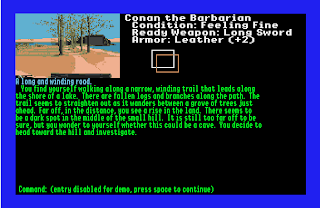 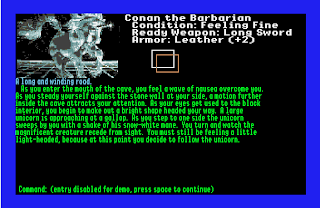 And the adventurer immediately finds a unicorn playing a bit of a "white rabbit" role, luring the player deeper. Why unicorns seem so popular in Eamon ports is beyond me (cf. Eamon Pro). Why they hang out in caves is even less clear. Then again, why Free Adventurers hang out in caves is itself obscure. 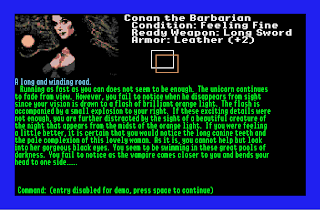 Unicorns and vampires in one cave!?! It's like a mythological creature overdose! Only with the inclusion of ninjas and an Archie Shepp soundtrack could this cave get any cooler. Sadly, the demo is drawing to a close. 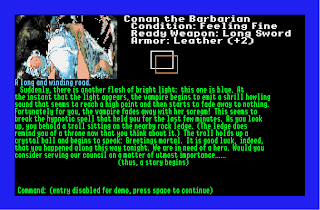 And a goblin from the Rankin/Bass production of The Hobbit (points for style!) ends the demo on a cliffhanger, saving the adventurer from the vampire and entreating him or her on a quest of some sort. Perhaps to wrangle that runaway unicorn? The world may never know.

So here is the cosmic conundrum: on the one hand we have HyperCard Eamon, which is complete yet entirely broken, and on the other we have Eamon IIGS, which works as intended but is utterly incomplete. I don't know a lick about programming a IIGS (I don't know a lick about programming in general, either) but perhaps this is an indication that it was really difficult? To go further would be to needlessly speculate. There's your tour.

Unrelated note: "Tenement of the Damned" really exists, I promise. Frank Black wanted to put a layer of polish on it before stamping it and releasing it into the wild.

Update: I make no warranties, as the site is not working for me at the moment, but the source of the file, titled "eamon2.gs.bxy," is here.  Wade Clarke suggests in the comments that the site whence I discovered the file may be down for some time; for those wishing to tinker with the file, it has a home for the time being at http://www.filedropper.com/eamon2gs.
Posted by T Ferguson at 12:24 AM

Wow, this looks very cool. Thanks for bringing it up. I am going to fire it up in an emulator. Maybe even on my real IIGS.

Is the hobbit literally from the Rankin Bass animated pic? If so, does that imply all the monster graphics will be scans from other sources? I know I have that dragon on a IIGS graphics disk someplace, and I don't know the original source of it.

I did try to brave the Hypercard IIGS Eamon after the earlier post about that, and I concur that it was inscrutably non-functional.

Frank - Eamon Deluxe said...
This comment has been removed by the author.
5:53 PM

Frank - Eamon Deluxe said...
This comment has been removed by the author.
5:55 PM

Hmm, I'm inclined to agree with Wade's theory of "borrowed" images being used as well.

IxQuick turned up this result:
http://virtualgs.larwe.com/Virtual_GS/Graphics_Gallery_files/Dragon.jpg

From searching images at:
https://s2-us3.ixquick.com/do/search
For the subject: apple IIgs red dragon

Right on the second page of results. Oddly, Raquel's 2012 Eamon Deluxe dragon shows up on the first page of results even though it's not associated with the Apple IIgs and I didn't even include "Eamon" in the search.

Must be a result of those ever-shifting forces that surround Planet Eamon...

The image is indeed from the Rankin/Bass film, whose visual aesthetic is seared into my psyche. Serendipitously, if one goes to the front page of Frank's above link, one is greeted by an image of an Apple IIGS and its monitor displays the landscape from the second screenshot.

With the provenance of three of the images nailed down, it's fair to infer that Raines was grabbing random art.

I'm adding a link to the file, though the site is presently refusing to load.

Thanks Thomas. Syndicomm, the site where the disk image came from, has undergone significant changes this year, and I doubt the image will show up there again, at least at the same address. I searched for it in the index of the asimov ftp archive but it's not in there. Could you send it to me? My email is bloomer at iprimus dot com dot au

Done. It's quite fortuitous that I discovered and acquired the file literally a day before the site went down.

Following Frank's lead, I ran a few more image searches on the dragon shown on the IIgs splash screen; turns out the original art was apparently done by the Hildebrandt brothers circa 1977, and depicts none other than dear old Smaug:
http://fan.theonering.net/~rolozo/cgi-bin/rolozo.cgi/image/hildebrandt?order=filename&filename=smaug.jpg

A fitting bit of trivia for the premiere weekend of "The Desolation of Smaug". :)