The following was excerpted out of a recent email from Thomas Ferguson to me. For those of you who just Googled "Eamon" for the first time in decades due to a sudden case of 8 bit nostalgia (or are confused and disappointed because you came here looking for the one-hit rapper):

Thomas is an active historian/archaeologist/preservationist for Donald Brown's "Vanilla" Eamon and all other things which mutated from that text adventure/RPG combo masterpiece of yore. He also happens to be one of the best author's ever to pen an Eamon adventure (A Runcible Cargo) and is also the current editor/publisher of the revived Eamon (Deluxe) Newsletter.

I don't have the magical powers that you and Matt Clark have, but I'd recommend this as a blog post if its convenient:

Kent Sullivan is posting a retrospective on the company that released Imagery! He's a super nice guy, it seems, and many readers of the Eamon blog would benefit from hearing about our distant cousins, I think.

I also anticipate finishing "Crypt Crashers" [Eamon Deluxe 5.0 conversion of a formerly "lost" Atari ST Eamon original] in the next few days. I've got most of the problems ironed out.

I hope that you're well.

TMF
I reckon that Thomas is correct about the Dr. Evil Laboratories articles being both interesting and relevant to readers of the Guild blog and plan to post links to the rest of the series as it develops.

So, unless you are still reading this in hope of it being a heavily disguised blog for the rapper, follow the link within the message to check out Kent Sullivan's fun blog and very cool "corporate logo".


Other Imagery! Related links (sort of):

Posted by Frank - Eamon Deluxe at 1:23 AM No comments:

The items mentioned in the title of this post all correspond to various projects from my overflowing work area this morning.

[Edit 8/13/2012: Apparently I forgot to add the links to the newsletter when I posted this. They are now included below as I had intended.]

The July 2012 issue of the Eamon Newsletter was finished around the end of July and silently posted (vision impaired users can go here for a plain text version) on the newsletter section of the Guild website a few days ago.

Since it's almost the middle of August, I figured I should finally get around to making an announcement on here. It contains eight pages of Eamon adventure reviews, including a few that were posted on the blog recently as well as new, previously unpublished reviews of the upgraded Eamon Deluxe "Beginner's Adventures" and each of the adventures contained within that set. 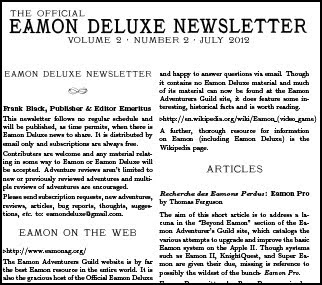 Headlining this issue, however, is another historical Eamon article by Thomas Ferguson regarding the rarely mentioned, "Eamon Pro" system for the Apple II. Thomas is certainly a master of his craft and I highly recommend his latest article to any Eamon fan.

Don't remember Eamon Pro? It's likely that very few people do (I was not even aware it existed until very recently).

Want to explore Eamon Pro for yourself? Be warned, disk images are not as easy to come by as the rest of the Apple II Eamon systems and are not currently available anywhere on the Guild site; nor will the disk images which can be found (through shrewd internet navigation) turn out to be an easy task to even get booted up and fully running. (I currently have a half completed set of standardized disk images that I have been modifying on the fly to run on any Apple II emulator. When the necessary modifications are finished these standardized images will be announced here and made available on the Guild website.)

While focusing on developing the Eamon Deluxe system and converting over 1/3 of the Classic Eamon library so far, I have long neglected my own entries into that library since the first Eamon Deluxe release. Recent play through left me very unsatisfied so I have decided to re-release all four of them in a new Deluxe package using the 5.0 system and further enhancing the entire set. This includes fixing up some areas of game play and also the addition of new routines and material. 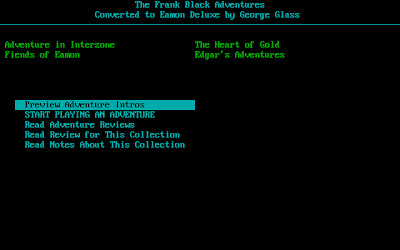 Hopefully The Frank Black Adventures Deluxe will be finished within the next few months; I just started work on it today, however, so I'm not prepared to figure out a plausible release date at this point. Maybe September if I'm lucky? Maybe sooner. At this point it's as random as A.J.'s comments, or the Planet Eamon itself for that matter...
Posted by Frank - Eamon Deluxe at 10:05 PM 3 comments: