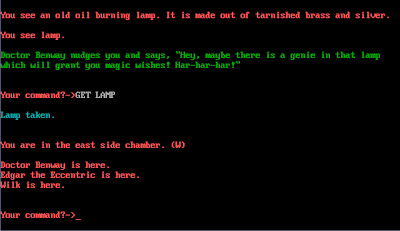 Posted by Frank - Eamon Deluxe at 4:45 AM No comments:

The State of the (Eamon) Union address.

It's been a while since I posted about the progress of Eamon Deluxe 5.0 so I thought I should take care of that while I have a moment.

The current development status is very promising. A beta version of Eamon Deluxe 5.0 is in the works and it will include a limited public release that anyone can download and try out as well a full version that will be sent directly to those who volunteered to be play testers.

I originally predicted a stable version being released around the end of March and it's the middle of June. In the world of software creation, being a few months behind schedule is not too bad at all. Especially if that software is freeware which is created by a team of one in his frustratingly limited spare time.

Initially I hadn't planned to make as many revisions as I have ended up with. Every time I made improvements in one area, it made another area stick out as needing them too. Thus the Creeping Feature Creature slowly took over. It is well worth the extra workload and waiting period though as the potentially finished product is looking very nice and should be able to carry Eamon into the next decade with very little in the way of updates required.

I only have a handful of programs to revise before I can start to get everything in order to release the final beta, with a stable version soon to follow. It shouldn't be too much longer now, and I thank everyone for their patience. The beta release will include a fully functional OS X specific package for Mac users and I am planning on adding a new page to the Eamon Guild website with screen shots and helpful instructions for installing and running Eamon Deluxe on Windows, Mac and Debian based Linux.

Right now Eamon is around 30 years old, and I currently have a version of Eamon Deluxe which will run seamlessly on virtually any OS and/or hardware released in the last 20 years or so. Plus I have received two brand new, very well written adventures so far this year; which makes me ponder whether or not Eamon holds the title of the oldest and most versatile computer RPG system in the world? If not, it seems it should at least be in the top ten...
Posted by Frank - Eamon Deluxe at 2:52 PM 2 comments: 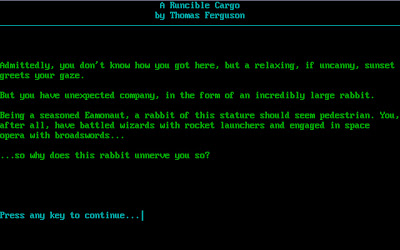 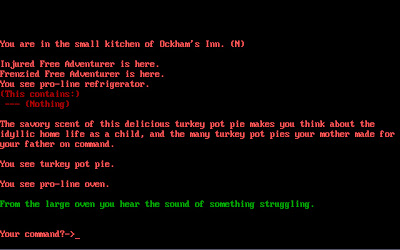 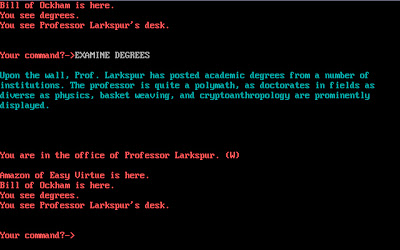 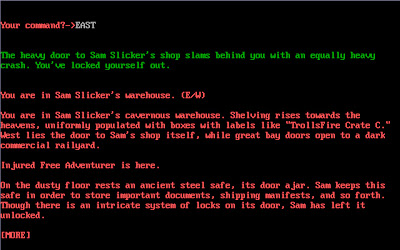 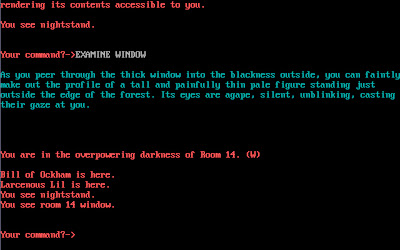 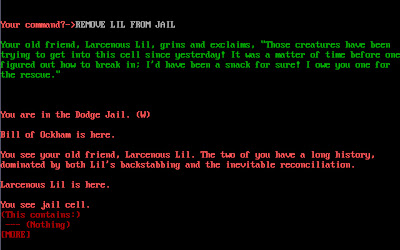 I posted a review for this adventure a while back with the intention of releasing it in a stand alone format soon after. A last minute decision was made to upgrade it into the new Eamon Deluxe 5.0 base adventure program, which is why there has been such a long delay between the initial review and the stand alone release.

A Runcible Cargo by Thomas Ferguson is one of the best Eamon adventures I have ever played and definitely one of the top 10 Eamons of all time. The stand alone version is compiled for Windows only, however it is playable on OS X and Linux. Contact me (eamondeluxe@gmail.com) for help playing it on those operating systems.

Read the adventure review in a past blog post.
Posted by Frank - Eamon Deluxe at 11:02 PM 2 comments: