As I have mentioned previously, Eamon Deluxe 5.0 will be cross-platform compatible. The OS X version is just about ready for testing and the beta will be sent out at the same time as the next Windows version. Packages for popular Linux distributions are also in development at this time.
Posted by Frank - Eamon Deluxe at 7:33 AM 2 comments:

The eamonag.org website is moving! However, you'll notice two outages to facilitate the move. The first one is currently underway, and the second will take place in the next week or so.

In the meantime, you can keep up to date with the Eamon world through the facebook page at https://www.facebook.com/EamonGuild or through the Eamon blog at  http://eamon-guild.blogspot.com/

Realm of Fantasy Upgrade and Review 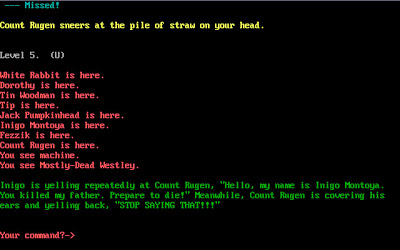 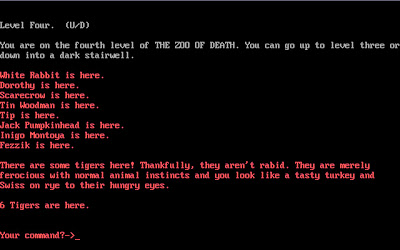 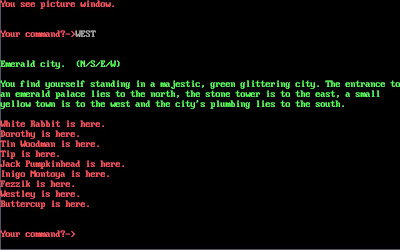 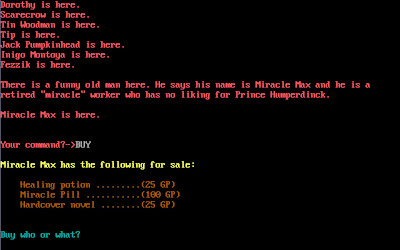 As promised, here is a review for Realm of Fantasy, an Eamon Deluxe original adventure from 2006 which has been upgraded to the 5.0 system as well as enhanced in many areas. I recently worked with the author on revising this strange but very fun adventure. Watch this blog for the upcoming release of another EDX original adventure, the very excellent A Runcible Cargo by Thomas Ferguson, which is in final development as I write this. It's a good year for Eamon.

A stand alone version of Realm of Fantasy can currently be downloaded from the Eamon Deluxe homepage.

This is the second adventure that was written specifically for the Eamon Deluxe platform. Though the name "Realm of Fantasy" is somewhat ambiguous, and the initial rescue-a-friend-from-a-cave quest you’re introduced to seems to indicate swords and sorcery, it doesn't take long before it becomes clear that "fantasy" in this case means dreamlike, fantastic or surreal, as you are introduced to a host of companions and situations from Alice in Wonderland, the Oz books, famous films and even the Super Mario Brothers games.

If the idea of having the likes of The White rabbit and Dorothy duking it out with the infamous Bowser doesn't appeal to you, then you will most likely not appreciate this adventure in its entirety. However, if you are the sort who has a surreal or literary mind then there are definitely some nice touches which will add to the fun. e.g. having the Wicked Witch of the West crushed by Dorothy’s house when she dies, or the freeing of a tin man from two evil trees.

One thing I particularly appreciated is that clearly the author was thinking of the Oz books, not the films, as characters like Momby and Tip from The Land of Oz appear. Dorothy also happens to be wearing silver shoes, not the ruby slippers which they are commonly mistaken for due to the popularity of the well known 1930's musical adaption. This deep knowledge however is rather a double edged sword, since there were some references I didn't understand myself.

The writing is adequate to the task at hand and often humorous in places, even though some of the descriptions are a little short. Some characters and places, such as the Queen of Hearts' Palace, might have done with a bit more description. Though certainly the short length of the descriptions in question is no worse than that found in many Classic Eamon adventures. Plus the surreal situations and settings are fun, light-hearted and much of an improvement over the average underground dungeon.

I didn't notice a large amount of specials (i.e. modifications to the standard Eamon Deluxe base adventure program), but the specials I noticed worked fairly well. Although it did seem as if most of the specials were located near the start of the game and the sort of tapered off where they could have been a bit more evenly distributed throughout the adventure. Indeed even the new commands BUY and SELL are only useable in one specific location and then only for a couple of items. Nonetheless, just having the shop there was a very nice touch, as it was nonexistent in the original, 2006 release of this adventure.

This is definitely a fighter's outing as the Realm contains a very large amount of combat, frequently against seemingly random opponents. I would recommend bringing at least a medium strength character into it, even though you do come across some fairly powerful weapons and healing items as you progress throughout the game.

One interesting fact which you will either love or hate are your many companions (sometimes you will find ten or more of them faithfully following you around), who are likewise pitted against large numbers of foes. In fact, it is fairly common in this adventure to find groups of 10, 20 or even 30 enemies at a time (all of whom die usually with a single hit from your trusty allies).

It can be said that this does make for a different style of battle which adds to the unique flavor of this adventure. I often found myself on the sidelines of the battles, playing healer and supporting my companions as they fought it out with my foes. On the other hand, this also means a lot of mindless tapping of the enter key to skip past combat text which can get somewhat repetitive and wearing. In all fairness though, the unusually large number of companions I met up with also meant that battles against groups of 20+ enemies took less rounds then one would initially imagine.

The small army of companions and extra enter hitting did complicate things several times while I was simply trying to go about exploring rooms and reading the full descriptions for everything. I found myself hitting enter one too many times and inadvertently causing new descriptive text to scroll away before it could be read. This can obviously get a little irritating, though it could also be argued that this was actually more of a symptom of my own impatience with reading the screen than a flaw in the adventure itself.

One feature I did enjoy about having an anomalous multitude of companions was having access to the various items they were carrying with them. In fact, you will most likely want to check the inventory of every companion you come across in order to get some of the bonus items that are sprinkled throughout the adventure.

Overall the system of sitting back and playing healer was a break from the standard combat found in most Eamon adventures which was rather fun (as was seeing Dorothy give the wicked witch what for). It might indeed have been nice if more weapons were found throughout the adventure, and also if those weapons were of random and varied types. An axe-wielding Dorothy or an AK-47 toting Princess Peach would have been a fun inclusion and still would have been within the limits of keeping in tune to the somewhat psychedelic feeling that this game presents.

Overall, if you like (in no particular order): combat, literary references, colorful famous characters, surreal settings, light-hearted fun and/or if you just have a sense of humour then you will enjoy this adventure. Likewise, I recommend the experience of at least one trip through the Realm of Fantasy to every fan of Eamon adventures as it is, in several different aspects, a very unique entry into the Eamon library.

A short review of Outsiders from Oz

Jared Davis, the author of the Eamon Deluxe original adventure "Realm of Fantasy", has recently published his first novel which is based upon the mythos of L. Frank Baum's Oz series. I recently ordered a copy from his current publisher, Lulu.com, and received a very nice, professionally printed hardcover edition within a few days.

Even though I had read the entire set of Oz books many years ago, I remembered very little about them when I ordered this book. However, Jared does a good job of compensating for Oz fans and newcomers alike, as he peppers in various pieces of background lore as needed and in an efficient manor which doesn't slow the pacing of the story. I was able to easily understand what was going on right from the first page.

I found Outsiders from Oz to be a relaxing and entertaining read. A lighthearted, yet quite interesting and creative fantasy story from a first time author who knows his subject matter well. All in all, Jared did an excellent job and I would recommend his work to anyone who enjoys reading fantasy fiction or simply wishes to show support for a fellow member of the Eamon community.

Outsiders from Oz is printed to order and available in both hardcover and paperback.
Posted by Frank - Eamon Deluxe at 9:33 PM No comments: 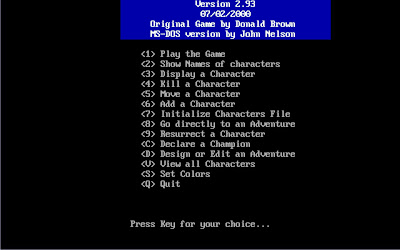 The PC Eamon Museum is a compilation of the various known attempts at converting the Classic Eamon gaming system from the Apple II series of computers to the PC family. All of the conversion “exhibits” in the museum were originally written for the MS-DOS operating system and took a fair amount of work and technical knowledge to run on modern computers.

The Museum was created to preserve all of these relics of Eamon history in one place as well as allow convenient access to view and even play them on modern computers. By using some of the Eamon Deluxe 5.0 gaming system framework, including a modified version of the freeware DOSBox emulator, the PC ports of Eamon included in the Museum are now accessible with just a few clicks on a variety of modern computers and operating systems.

Those on the Eamon Deluxe 5.0 play tester list who have reported that they are using Windows and testing in Standard Mode (there is no VI Mode available for the Museum) should check their email for a message and download link regarding the Museum. (If you are on the list and do not receive a message, please email me.)

A public download will also be made available very soon, once the Museum has been initially tested and verified. Visit The PC Eamon Museum homepage on the Eamon Adventurer's Guild site for more details as well as future downloads and updates.
Posted by Frank - Eamon Deluxe at 11:16 PM No comments:

Due to technical difficulties, the joomla site is offline for the time being. I hope to be able to restore it soon. Thanks!
Posted by Matthew at 9:19 PM 1 comment: