I am happy to announce that an open Beta version of the new Eamon Deluxe 5.0 system will be available for public download any day now. I'm just polishing up a few loose ends and waiting for program verifications from a few play testers that use certain computer setups which I don't currently have access to and can't test myself. The open Beta release of Eamon Deluxe will also be cross-platform, with versions available to Windows, OSX and Linux users alike.

I am also happy to announce that I contacted the DOSBox Team regarding bundling and distribution, and included a beta copy Eamon Deluxe for them to preview. I promptly received a response from Peter Veenstra, the original creator of DOSBox. Not only was Peter's message helpful, but it was also very positive and complimentary regarding his opinion of the Eamon Deluxe system overall.

The release of Eamon Deluxe 5.0 will be announced on this blog, hopefully within the next few days or so. In the meantime you can check out the freshly published Eamon Deluxe 5.0 Player's Manual which includes a lot of new material, including an expanded historical section and fun new additions to the cannon of Eamon lore. An indexed web version is available where the previous manual resided on the Eamon Guild website and also available in a nice PDF format (courtesy of Thomas Ferguson).

Now, on a somewhat related subject, I'm sure many former Apple II users remember the Beagle Bros software company. I was, and still am, a big fan of everything about them. Their products were excellent, their staff was brilliant and their company look, style and attitude was fun and refreshing. I still use some of their programs to this day, particularly when recovering or repairing the oddball "lost" Eamon related disk images that Thomas Ferguson keeps digging up from the bowels of the interwebs.

Last summer, after discovering that my kids really liked playing the game "Hang Person" from the "Beagle Bag" games disk, I decided to start a side project and make an attempt to convert it to the PC platform. In my typical side project fashion, I made it to the "mostly finished" point and then promptly forgot about it.

As a tribute to the Beagles, and just for fun, I recently finished it up and incorporated it into Eamon Deluxe 5.0 as an available option on the Adventure Design Menu. Tired of editing monsters and artifacts? Need a break from entering your new adventure? Can't think of any clever answers to add to your adventure's HINTS file? Take a break, and play some Hang Person! 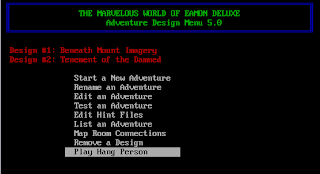 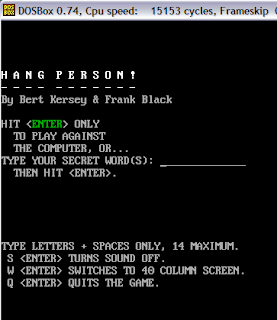 Because of the differences in video hardware between the Apple II and the PC, and primarily because the PC doesn't even have a "LORES graphics" screen mode, the poor fella being hung may look a little distorted from his original form on the Apple II. 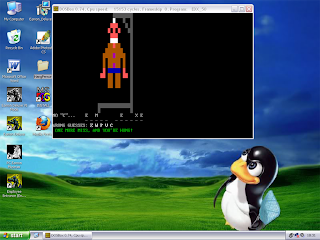 But, hey, you have to admit that this is a pretty authentic conversion. I made only a few minor changes and fixed an annoying bug in the original version (it didn't keep track of what letters had already been tried) along the way. I even included an option that allows switching the screen mode to 40 columns (which makes the gentleman in the gallows look a little less distorted). 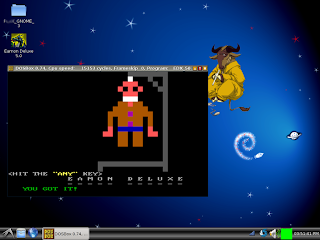 Does adding Hang Person  as an Adventure Design Menu option sound random? I think it does. The odd inclusion in question was partially inspired by one of my favorite Debian Linux programs, "Aptitude". Aptitude is a powerful terminal (text only) based program for managing the programs that make up a Linux operating system. Among the various tools of package management, Aptitude's menu includes, quite randomly, an option to play Minesweeper. I was extremely amused when I discovered this, and it still makes me smile to this day. 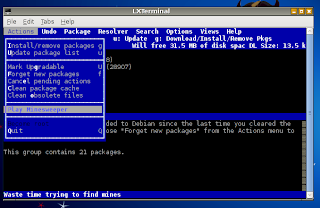 A limit of only 14 letters?

When we get Hangperson Deluxe, can this ceiling be raised to, say, 20 letters?

Funny you should ask. One of the two things I originally intended to change was the 14 character limit (the other being the duplicate letter acceptance bug which I DID fix), then I changed my mind at the last minute so that glorious 40-column mode could be included without adding too much to the workload.

Don't worry too much, though. A 28 letter word entry option will be available in the Hang Person Pro(tm) release (Platinum Unicorn Edition).

So how is "Eamon Deluxe Forever" coming along?

Okay, "Eamon Deluxe Forever"... that got a laugh out of me. Bravo.

That got a laugh out of me (well a hearty chuckle anyway). But Thomas, Did not my proposed title cause amusement as well? It was included primarily for you...

Frank, sometimes we're not recognized for our outstanding wit and cleverness. Why, I'm still waiting for someone to compliment me on my "not knowing a Commodore 64 from an Adam" joke, which was the single funniest thing I've ever written.

So here you go: Frank, it was funny. Good show.