Announcing Eamon #255: Tenement of the Damned

I'm very happy to announce that Eamon #255 "Tenement of the Damned" has been completed and an initial copy can be downloaded here. [Edit: In preparation for the official .DSK being posted, the download link is removed.] Frank Black was able to recover the entirety of the French program and I, in turn, translated it into English using the 6.2 Dungeon Designer Diskette. ("Maudit" is Version 6 and I felt that the English version ought to approximate the French experience as much as possible.) Finally, a menu was put in giving players the option of playing the game in either French or in English. 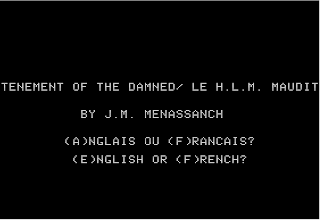 Now, "Tenement of the Damned," an adventure oriented towards looting a crumbling public housing block, is not exactly Sam Ruby-caliber. (Indeed, that Frank Black salvaged the MAIN PGM was a bit of an anticlimax as there is no special programming to speak of.) The most it musters by way of puzzles is a pair of secret rooms, a hidden artifact, and some hunting for keys. The goal is simply to find friends and lay waste the the rest of the tenement... there isn't even an introduction at the beginning of the adventure. 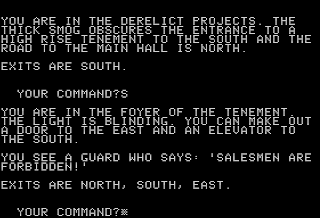 On the other hand, it's certainly not "Sam"-caliber either. While it is effectively the French analogue of the "Beginner's Cave" and its premise and execution are similarly simple, the descriptions tend to be rich and witty and the map, though relatively small, invites exploration. The characters and artifacts you'll encounter are all colorful and wacky. The general mood, tending towards the absurd, is most similar to the charm of the great, old Jim Jacobson adventures such as "Cave of the Mind." There are bouts of self-reference, fourth-wall-breaking, and Monty Python-esque humor, making for a consistently enjoyable adventure. 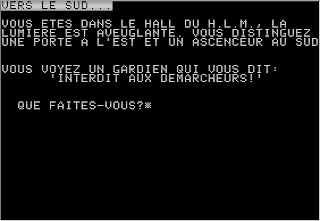 An official .DSK of the dual English/French version ought to be posted soon. I plan on writing a more lengthy review in the next issue of the Eamon Deluxe Newsletter. Who would have thought that brushing up on one's French (or English, as the case may be) could be so much fun?
Posted by T Ferguson at 12:52 AM