Now, it seems that everyone aware of Jon Walker's PC conversion of Eamon has given it a bit of grief, myself included. John Nelson called it "cumbersome," a "nightmare," and "too difficult to maintain" in the NEUC Newsletter and neither Frank nor I were all that much kinder ourselves. But griping aside, I'm confident that Walker's contribution was significant in bringing Eamon to the PC folks.

I'm happy to announce that two more original adventures for Walker's PC Eamon have been discovered intact, "Cronum's Castle" by Matt Ashcraft & Richard Tonsing and "Lord of the Underland" by Justin Langseth. They were the first and second place winners, respectively, in a 1987 "Write an Adventure
Module" contest held by PC-SIG, the company that took the reins for distribution of Walker's Eamon. 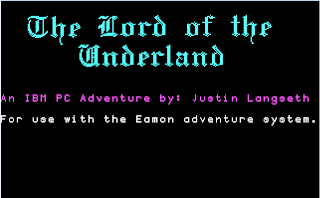 I can't attest to their content nor quality at this point (who- honestly- is able to get Walker's Eamon up and running without hassle?)  but they're prize-winning adventures so they've got to be good. This brings the Walker PC Eamon library to:


Of course, I'll try to get playable copies posted soon.

I'll also put in a word for Jason Scott's textfiles.com, where these two Eamons were lurking. The site is a wonderful service, archiving a great many files and programs that would otherwise have been lost to digital purgatory.

As an update, I'm posting the links to the files themselves. They can be found at the below links.

As a second update, Cronum and Underland are now part of the PC Eamon Museum and can be played by going to www.eamonag.org/pages/pc_eamon_museum.htm.

I took a peek at the files last night.I wonder how many more of these "lost" Eamons are out there? And, for what it's worth, anybody can get Johnny Walker's Eamon running very easily these days:

Thanks for the kind words. I hope to have these folded into Frank Black's PC Eamon Museum when he's got time.