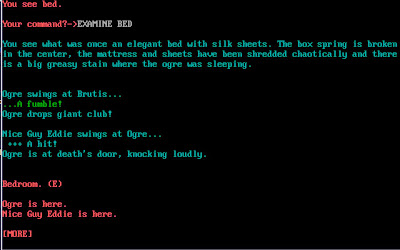 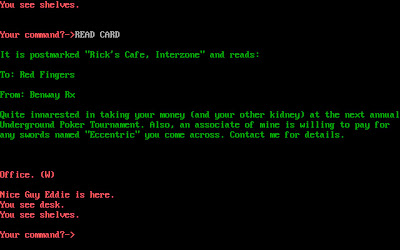 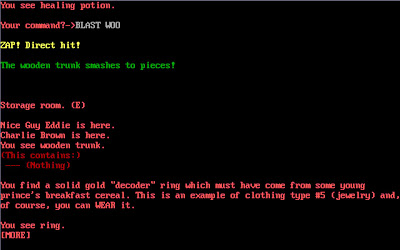 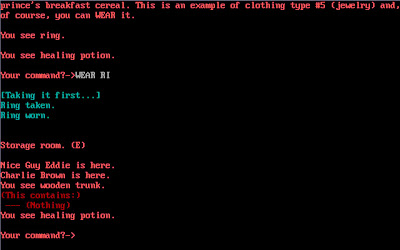 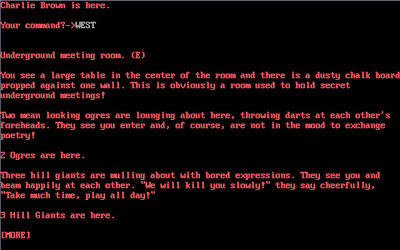 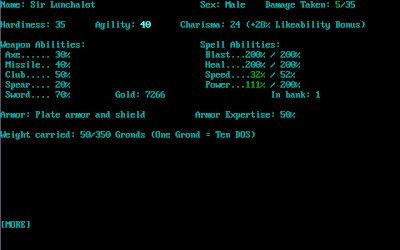 This is a small adventure that shows off the new base program and the enhanced 5.0 system features. It uses a stand alone system that was created for the sake of releasing adventures while upgrades are being completed on the rest of the Eamon Deluxe 5.0 system.

This is a zip file containing a folder called "Eamon Deluxe Demo Adventure". Extract the folder to anyplace that you wish and do the following to start playing:

Windows users:
Open the folder and double-click "Eamon Deluxe Demo Adventure". Press "N" when asked if you need to use VI Mode.

Mac and Linux users:
Currently you must have the DOSBox emulator installed. Mount the "DX_FILES" folder to DOSBox, switch to the mounted directory, then use "EDX_SA1.BAT" to start.


Please send comments, reports, thoughts, suggestions etc. to eamondeluxe (at) gmail.com (or just leave them in the comments section of this post).


Watch this blog for more Eamon Deluxe original adventures. I'll be releasing A Runcible Cargo next, with two more adventures to follow. Below is a review of the 5.0 Demo Adventure from the upcoming Eamon Deluxe Newsletter.

This adventure is, like the Beginner's Cave, a fairly simple slash and grab scenario for starting level characters intended as an introduction to the world of Eamon Deluxe. There are however a number of very nice points that make the Demo Adventure stand out from the other Beginner Adventures such as the Beginner's Cave.

Firstly, though there is indeed a classic dungeon with treasures, this isn't in fact all that the setting contains. It's entrance and introduction set the scene with you exploring an abandoned building which quickly turns out to be the home of a thief who's gotten himself into trouble with an underground criminal gang which employs brutish monsters as its extra muscle.

While not an original or highly fleshed out plot, this does at least give a little more explanation to what you are doing, and means that the enemies, albeit the usual giants and ogres, have a little more purpose than just random wildlife which got in your way and the treasure was slightly more logically explained than just being a natural feature of underground dungeons.

This plot also gives something of a quest feeling to the game even though there aren't any actual objectives, especially since the final showdown is rather a tough one for a beginning level character and you do get to rescue the thief himself. It even has a very nice exit at the end of the dungeon to go back to the Main Hall, rather than making you backtrack to the entrance as many other adventures do.

Another major factor in this adventure as opposed to the others is the huge range of embedded artifacts. Though there are no puzzles such as passwords, you still do have to make far more use of the EXAMINE command than the others in the Beginner Adventures set. In fact, just about every single piece of furniture mentioned in the room descriptions is examinable, sometimes to your profit, and several monsters are carrying artifacts so using the inventory command on them certainly helps too.

The adventure isn't entirely stand alone either since, as well as some comical references to popular interactive fiction, there are also references to some other Eamon adventures which experienced Eamonaughts will of course pick up on, and new players will find as a tantalizing hint to what the rest of Eamon Deluxe has to offer.

Though it is a demo adventure and uses only the power of the Eamon Deluxe system itself with no fancy programming, the large number of embedded artifacts (those which only show up in the descriptions of other things and not directly until you have examined them) means that players should keep an eye out for objects to examine, since the game strategically uses these to create its puzzles without the use of extra programming. In fact, several points can't be passed without examining your surroundings carefully.

My only minor criticism is that several artifacts are a little fourth wall breaking, such as a "message" which exists only to test in-game error handling; or mentioning that a certain monster has specific attributes, a certain artifact is of a specific type, etc.. But there are very few of these instances when compared to all the other items in the game and this is, after all, a demo adventure for the entire Eamon Deluxe System.

Either way it's certainly worth a visit, and a fun introduction to your Eamon career.
Posted by Frank - Eamon Deluxe at 5:08 AM